INTRODUCTION TO THE PATTERN OF INTERSECTING CIRCLES/SPHERES

The key to constructing roots is recognizing the power of the pattern. 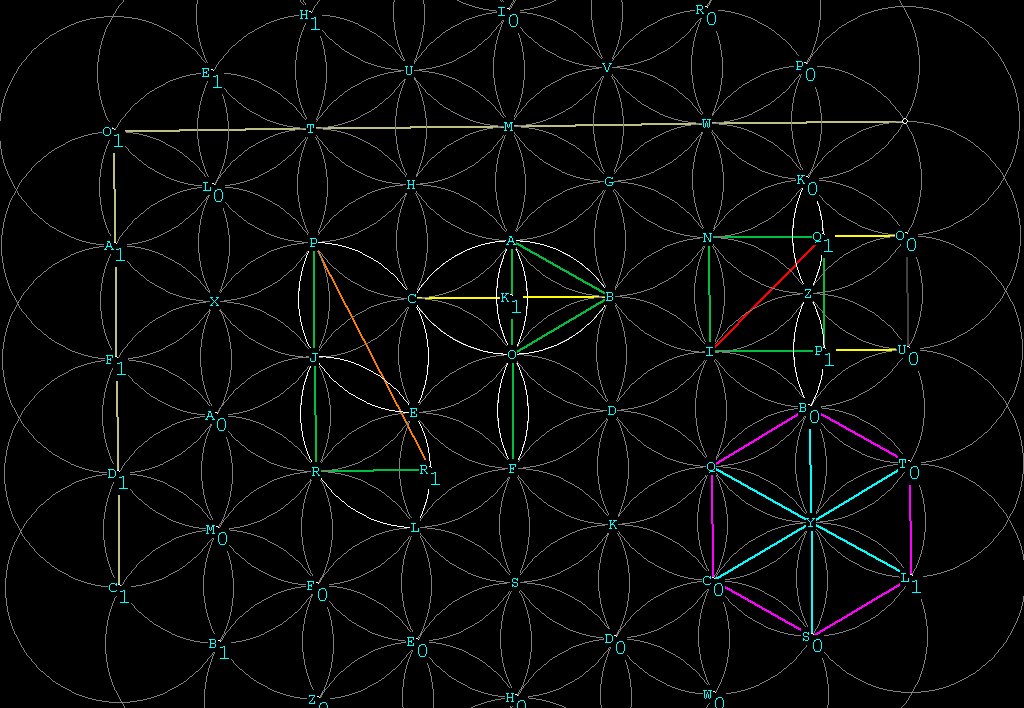 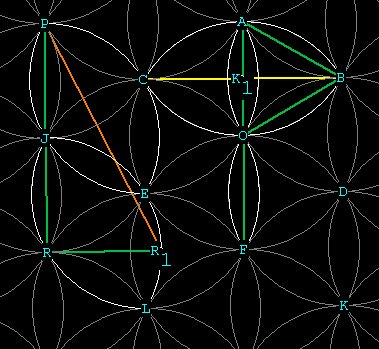 First off, notice that every point is the center of a circle.
Notice that the points in the pattern can be considered to be part of a square/cube. Note the lines C1 - O1 - W. The pattern can be considered to be laid out in a square/cube.
Notice the 6 directions of the pattern, originating from any point. I have highlighted the 6 directions in cyan from the circle at Y, and have drawn a hexagon around the points.
This pattern is primarily heaxagonal, with the square/cube fitting into it.
From  3D Basics  we saw that first comes the hexagon and the equilateral triangle, then the square. So the \/¯3 is the primary pattern with the \/¯2 contained within it.
The geometry of this pattern is \/¯3 and \/¯2. It is the geometry of crystals, minerals, silicon, snowflakes, etc.
This is Buckminster Fuller's Isotropic Vector Matrix, with the addition of the intersecting circle/sphere. Bucky probably considered this pattern and rejected it, because there is no practical way to get to solids to intersect! So he left out the intersecting spheres and worked only with the tangent ones.
Apologies to Bucky, but I believe that  the circle/sphere is the primary geometric pattern in this universe.
From the intersecting spheres, and lines drawn between the points,  any imaginable shape can be designed.

Working With The Pattern

Single integers are easy to determine.

The distance from one end of any of the smaller vesicas to the other end is precisely 1.
Notice OA and OF, which are radii of the circle centered at O.

Now you know everything there is to know about how to determine roots in the pattern.